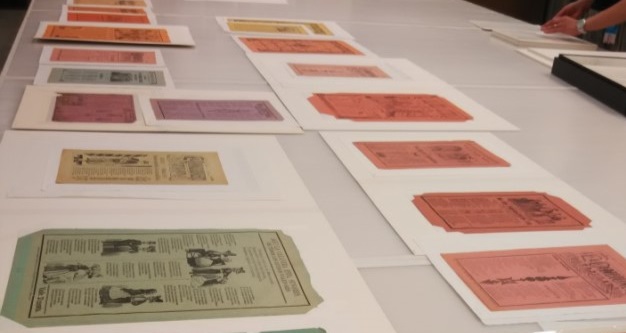 Jose Guadalupe Posada (1852-1913) was a prolific and influential Mexican printmaker; he produced thousands of images printed on a variety of poor-quality papers, often colored with vibrant but fugitive aniline dyes. The Amon Carter Museum of American Art has a large collection of approximately 400 prints attributed to Posada, many of which retain their bright color. A number of these are unstable due to oxidized pressure-sensitive tape residue, penetrating and weakening the short-fibered paper. In addition, aniline dyes are sensitive to solvents, complicating treatment.

Because aniline dyes have varying sensitives to different solvents it is necessary to characterize them before an appropriate treatment protocol can be developed. A previous study of Posada’s prints identified several aniline dyes using Fourier Transform (FT)-Raman spectroscopy. Of these, the yellow dyes could not be fully characterized. In this study, ToF-SIMS was used to discern the dyes present in the colored papers with particular focus on the yellow dyes.

ToF-SIMS is emerging as a valuable analytical technique for the identification of organic and inorganic components. Its high sensitivity and small sample size requirements make it potentially useful for the analysis of dyes and works on paper. For this study a selection of Posada’s prints in various colors from the Amon Carter’s collection were examined using ToF-SIMS. In addition, two paper pulp dye manuals containing naturally aged, dyed-paper samples contemporary to the Posada prints were also analyzed as known references. Preliminary analysis has produced significant data for all the dyes analyzed.

As part of developing a treatment protocol for the Posada prints, an experiment was set up using artificially aged paper and tapes to simulate the removal of oxidized tape from fragile dyed papers. A variety of methods were employed. Samples were created by applying Scotch MagicTM tape (acetate backing; acrylic adhesive), 3M 2214 paper tape (crepe paper backing; rubber adhesive), gummed brown paper tape (kraft paper backing; starch adhesive), and Slime rubber cement to several c.1900s dyed and undyed broadsides, mimicking the Posada prints. The samples were then ‘treated’ with solvent and suction, solvent vapor via plasma, and rigid Gellan gum impregnated with solvent. The samples were imaged using visible light and Ultra-Violet (UV) before and after treatment, along with spectrophotometer readings to monitor and record any changes in the samples.

Because aniline dyes are prevalent in many turn of the century objects, as are oxidized tapes, developing an effective treatment protocol has tremendous potential benefit. 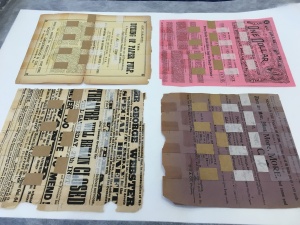 When stubborn tape finally becomes not-so-stubborn…feels so good
It is not common to have a visible difference from surface cleaning…so when it is visible, it is extra exciting!
Independent objects conservator Kimberleigh Collins-Peynaud (left) and I spent the last week condition checking and installing more than 350 objects with MuseumsPartner for the exhibition Egypt: The Time of Pharoahs at NHMU. What an amazing opportunity to look at such incredible objects, some of which were 4,500 years old!
Last weekend, I tag teamed with paper conservator Brook Prestowitz to complete this stubborn backing removal, wash, and tension lining of this steel engraving. Our necks and backs definitely bore the brunt of this treatment so treatment was interlaced with yoga flow and stretching 🧘🏻‍♀️
Capillary washing with citrate solutions focusing on discoloured areas 🛀 if you look closely you can see discolouration being released along the edges.
Swipe for before and after treatment images! Large repairs of a watercolour that had extensive splitting. Treatment involved removing old failing repairs, placing new repairs and some isolated in-painting in the repaired area.
Loading Comments...
%d bloggers like this: